Arizona Governor Doug Ducey (R) announced that the state will withhold Covid-19 relief funds from schools that have mask mandates in place.

“Parents are in the driver’s seat, and it’s their right to make decisions that best fit the needs of their children. Safety recommendations are welcomed and encouraged — mandates that place more stress on students and families aren’t,” Ducey said in a statement. “These grants acknowledge efforts by schools and educators that are following state laws and keeping their classroom doors open for Arizona’s students.”

“This deeply irresponsible plan appears to violate the plain language of the law as written by Congress as well as the guidance issued by the Department of the Treasury. These funds are not intended to be used for policies that undercut scientific research to pursue purely partisan ideological priorities,” Stanton wrote, calling on the Treasury Department to “make clear to the governor that if he follows through with this reckless proposal, he risks losing these funds for Arizona.”

The Governor’s gambit to deny American Rescue Plan funds to schools following CDC guidance not only puts students at risk—it violates the law as written by Congress.
@USTreasury should make clear that these funds should go to all schools. https://t.co/eq6PDKpx8T 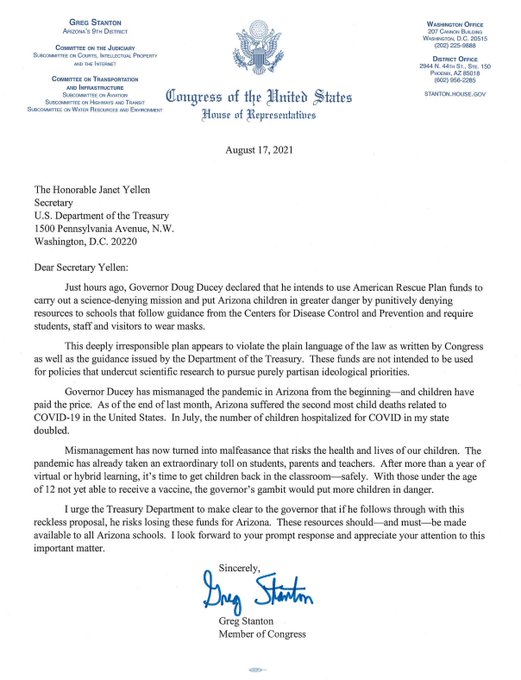 Ducey’s efforts bring to mind Florida Governor Ron DeSantis’s attempt to slash the salaries of school officials who impose mask mandates in defiance of his executive order. DeSantis later walked back the threat.

His spokesperson said “activist, anti-science school board members” should dock their own salaries if the state imposes financial sanctions on their districts.

“Those officials should own their decision — and that means owning the consequences of their decisions rather than demanding students, teachers, and school staff to foot the bill for their potential grandstanding,” said Christina Pushaw, the governor’s press secretary.